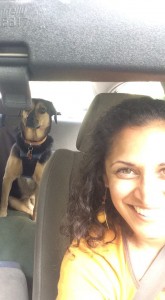 While the Datar family wants Anita’s story told, they are unable to accommodate all requests. Family quotes and statements will be made available here.

We are devastated that Anita is gone—it’s unbelievable to us that she has been killed in this senseless act of violence and terrorism. Anita was one of the kindest and most generous people we know. She loved her family and her work tremendously. Everything she did in her life she did to help others— as a mother, public health expert, daughter, sister and friend. And while we are angry and saddened that she has been killed, we know that she would want to promote education and healthcare to prevent violence and poverty at home and abroad, not intolerance.

Anita Ashok Datar was born in western Massachusetts and grew up in northern New Jersey. She earned an MPH and MPA from Columbia University’s Joseph Mailman School of Public Health and School of International and Public Affairs. She worked in Senegal for two years with the Peace Corps (1997-1999), and has spent much of her career working to advance global health and international development, with a focus on population and reproductive health, family planning, and HIV. She was a Senior Manager at Palladium Group and a founding member of Tulalens (www.tulalens.org), a not-for-profit organization connecting underserved communities with quality health services.

Of all her accomplishments, she was most proud of her son. She is survived by him, her parents, brother, and many, many friends around the world.

Today, families in too many nations are grieving the senseless loss of their loved ones in the attacks in France and in Mali.  As Americans, we remember Nohemi Gonzalez, who was just 23 years old, a design major from California State University.  She was in Paris to pursue her dream of designing innovations that would improve the lives of people around the world.  And we remember Anita Datar of Maryland.  She’s a veteran of the Peace Corps, a mother to her young son, who devoted her life to helping the world’s poor, including women and girls in Mali, lift themselves up with health and education.

Nohemi and Anita embodied the values of service and compassion that no terrorist can extinguish.  Their legacy will endure in the family and friends who carry on their work.  They remind me of my daughters, or my mother, who, on the one hand, had their whole life ahead of them, and on the other hand, had devoted their lives to helping other people.  And it is worth us remembering when we look at the statistics that there are beautiful, wonderful lives behind the terrible death tolls that we see in these places.

Today all State buildings are flying flags at half-staff in recognition of the lives and in mourning of the passing of Anita Datar and the other victims of the terrorist attacks in Bamako, Mali.
On November 20, 2015, terrorists attacked a hotel in Bamako, Mali, killing at least 19 people. Among those murdered was a 41-year-old American, Anita Datar, who grew up in New Jersey and graduated from Mount Olive High School in Flanders in 1991, and from Rutgers University in 1995. Anita Datar dedicated her life to helping others by delivering health services to people in some of the poorest parts of the world, exemplified by her work in the Peace Corps and her distinguished career in international development.

Anita Datar is a true hero and role model of the highest order, who bravely immersed herself in dangerous environments, and whose life’s work is a testament to her tremendous courage, remarkable compassion, and unwavering commitment to improving the lives of those most in need. It is with deep sadness that we mourn the loss of Anita Datar and all the victims of the terrorist attack in Bamako, Mali, and we pause to offer our sincerest sympathies to their families, friends, and loved ones.

I knew Anita as the loving mother of a wonderful seven-year old boy and the former partner of David Garten, one of my senior policy advisers in the Senate. My prayers are with the Datar and Garten families, especially Anita and David’s son. My heart breaks thinking of the burden he will now bear on his small shoulders and the courage he will have to show in the days ahead.

Senate Resolution 347: A resolution honoring the memory and legacy of Anita Ashok Datar

Statement from the Palladium Group.

Statement from the Peace Corps.